The other day my wife mentioned that median income in the US had gone down over the past few years, which led to a random thought while I was driving home.  Perhaps when median income is plotted over time it should be weighted based on the relative earning power of the current age of the population.  When a large portion of the population is at the age of their optimum earning power (around 50) you would expect median income to be higher than when a large portion is very young or very old.

Had a mandatory training meeting today on our time tracking software. Since we already had to figure out the 33 step process a few weeks ago so we could get paid…  today we had an impromptu hackathon.

This software is so bad that surely I can build something better during the training meeting for said software.  -Me

Now, how to beat my coworker Mikkel who is wicked good? We both have to vaguely pay attention to the webinar so that’s an equal handicap. Aha, don’t acknowledge that I’m serious until about 15 minutes in. Especially since my computer is creakily working toward four years of service so a few tasks that should take 20 seconds instead drag on for several minutes. It’s about five minutes into the hour when I start, in theory that leaves 55 minutes to build something cool.

Now the biggest problem with the real time-tracking software is that you have to enter hours for each day.  This is dumb when the only useful purpose it serves is to track vacation time and try to avoid everyone being on vacation at once during a big release.

Don’t want an hours worked for the day object, let’s do the opposite and create-domain-class TimeOff.  Next create some controllers, set scaffold=true and voila we’ve the world’s simplest app for entering time off.

One of those commands takes much longer than it should and after firing up Intellij as well I’m at the 15 minute mark.  Mikkel realizes I’m serious and starts cranking out a rails app.

No problem, time for a secret weapon: Dojo.

I know Dojo has some great calendar widgets and a calendar sounds like a good interface for something concerned with days and time. Start looking through docs; not that calendar; this looks right; nope wasn’t that either.  Ok, finally got the right code, still getting a weird error though…

And the webinar is over, done after 40 minutes.

What?  I’ve only been coding for 35 mins and Mikkel for 20.  Well, time to show our results.  Mikkel’s lets you enter hours worked one day after another.  With about 15 steps to fill out a two week pay period it’s a more than 100% improvement over the same part of the real app.  And mine?  Giant javascript error, typical dojo.  Damn.

Couldn’t let it end there though.  Put another 15 minutes in to wire up json output in Grails and get the javascript error fixed and…  Bam, a decent prototype for the interface. 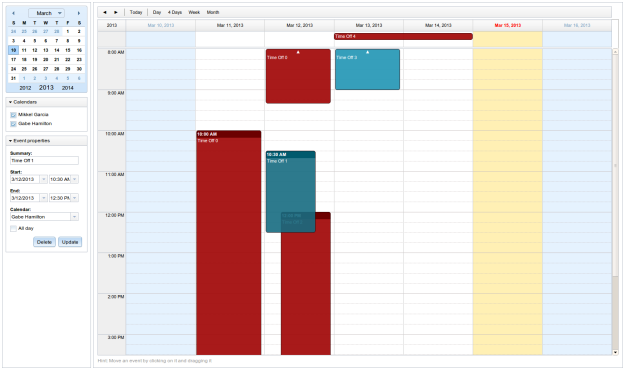 For comparison, here’s the real app.  Now I just need to turn my prototype into a real app…

I’m not quite sure why companies adopt time tracking software.  A friend mentioned that he thought there was some accounting treatment that encouraged it but some web searching has only lead me to BS statements like these.

“Time is money, so once it is clear where employees are spending their time, an employer can decide how to better prepare and deal with projects.”

“With a distributed company it ensures that everyone is working.”

Yes, entering eights into boxes ensures that I’m working.  Apparently if the time tracking interface is as cumbersome as possible someone can be extra sure that I’m hard at work.

Now, HR people tend to be extremely nice and well-meaning, perhaps this makes them especially susceptible to the sales pitch of time tracking companies. I understand if a company has part-time employees, or is billing hours to clients; then tracking those hours can make sense. For salaried employees who are otherwise being treated as adults, it’s a gigantic waste of time. Particularly if the software requires a training meeting.

Which leads to TODAY’S CHALLENGE.